How to occupy your school: a lesson from Brazil

Ahead of the glitz and glamour of the Rio 2016 opening ceremony the eyes of the world will be trained on Brazil, though more often than not the news focuses on complaints of raw sewage in swimming venues or ‘boring’ outfits over human rights. With Brazil as a whole suffering an economic slowdown and a major political crisis many public services have been hit with cuts to free up cash ahead of the games, with health, transport and education particularly affected.

The root of many recent austerity measures can be traced to the country’s political crisis. After the suspension of President Rousseff ahead of an impeachment vote, the senators who voted to remove her powers began rushing to pass fiscally and morally conservative laws, including cuts to education and restrictions on abortion, while plans to allow children to be punished as adults for serious crimes could also be resurrected.

In São Paulo, the state’s governor tried to push through changes that would close almost 100 public schools and affect hundreds of thousands of elementary, middle and high school students in late 2015. This plan, created without consultation, was the final straw for many who saw the government as mired in corruption or squandering resources elsewhere.

A generation of young people, previously relegated to supporting the strikes being organised by their teachers, took the initiative and peacefully occupied schools across the territory. Inspired by similar action in Chile taken by university students, the young activists translated a guide from that movement, titled ‘How to occupy your school’ and shared it widely using the Whatsapp and Facebook.

The government tried to eject the pupils forcefully, sending military police armed with rifles to terrorise and attack them, but the students used their phones and camera to document the violence and turn their attacker’s force against them. The occupiers stayed, buoyed by public support and provisions from teachers and parents and soon more protests sprung up across the state, in spite of the government’s continued use of heavy-handed violence.

The students, disadvantaged by the government’s failure to prioritise education, were galvanised by the action. After taking the government to the Inter-American Commission on Human Rights over the force used against them the protesters won over national courts, secured an end to the school restructuring plans (for now) and saw the resignation of the Secretary of Education, demonstrating the power of peaceful protest in the face of overwhelming force.

Despite these victories, new plans for educational reform were introduced, before being quickly slated as politically motivated. Upon entering office in June of this year, the interim government’s national Minister of Education dismissed 31 advisors, gutting the Department of Continuing Education, Literacy, Diversity and Inclusion. The dismissals affect several other bodies, notably those charged with implementing and evaluating national education policy, leading critics to suggest that the government is dismantling policies promoting inclusion and the reduction of inequality in schools.

At the same time legislators proposed new measures to deal with ‘political indoctrination’ in schools, labelled “Schools without party". The draft Bill calls for teachers to be banned from expressing philosophical or political ideologies, which the country’s conservatives suggest is the sole domain of the parent, and includes one passage insisting that students must be allowed to mature “in harmony with their biological gender identity”. If imposed, the law would constitute a serious attack on freedom of expression for teachers, preventing them from discussing important issues freely in school, and destroying a space where children would ordinarily be free to discuss their ideas and experiences with their peers.

Rio de Janeiro is now in a state of financial emergency. The Olympics are expected to be 43 percent over budget, while spending on health, transport and education has been slashed to compensate. Highschoolers have begun protesting throughout the city and the wider state to express their discontent at the corruption, mismanagement and out-of-step thinking that they see the older political generation as responsible for. 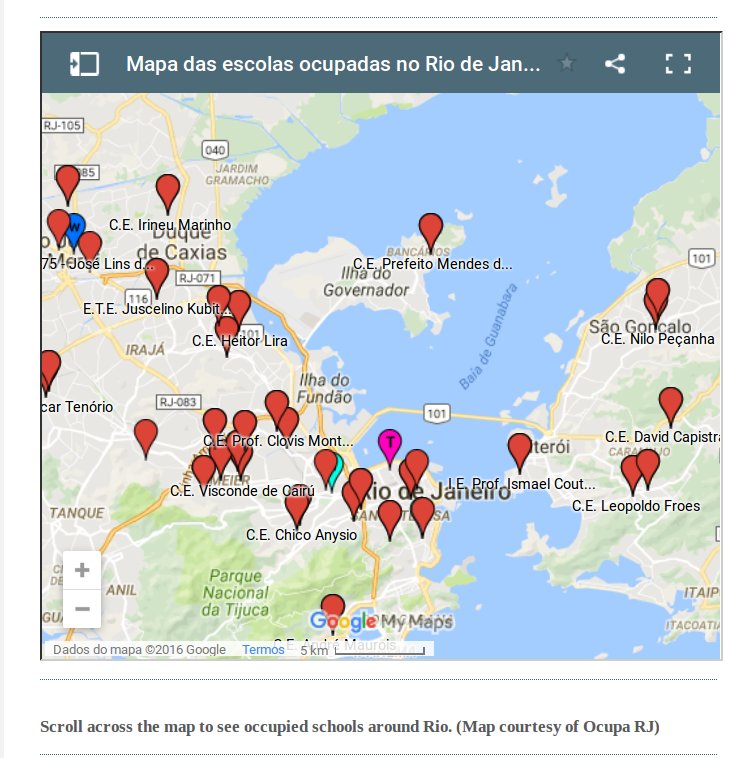 Following in the footsteps of activists in São Paulo, students are decrying arbitrary firings of staff members, the axing of humanities and arts subjects, and overcrowded and decrepit classrooms where one teacher is often expected to educate between 45 and 70 students at a time. Teachers and students alike have pointed to the disproportionate spending lavished on the Olympics and the brutal cuts to education in the same city, claiming that the government does not understand the struggle of ordinary people or the importance of a good, rounded education.

During these occupations many students have also organised meetings to discuss curriculum reform, cultural activities and other work that could usefully inform the government’s next attempts at changing education policy. So far, the mood in Brazil has been combative, with students continuing to be hauled out of schools by the state’s militarised police, despite the fact that the government could learn a lot from its politically active students.

However, without the ability to vote, students will continue to be forced to take direct action. Their use of technology and cooperation to overcome repression and present new ideas is inspiring. With minimal resources and experience young people across the country organised peacefully and brought a system they overwhelmingly disagreed with to a standstill.

But Rio, and Brazil as a whole, needs to ask itself why children are being forced to fight the government at every step for their rights, to education to assembly, and to have their voices heard amid the clamour of the games.

Students may be protesting primarily against cuts to schooling budgets, but they are fighting a system which is trying to make their rights, and the rights of many other ordinary Brazilians, negotiable. While the senate continues to push through laws that hurt women, children and indigenous communities the stand being taken by Brazil’s students may be the country’s best hope for protecting its seemingly-ailing systems of democracy, rule of law and human rights while the rest of the world focuses on the spectacle of the Olympics. 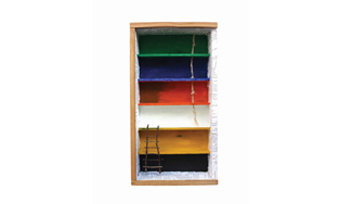