JAPAN: Children sue to be evacuated from radiation fall-out zone

Summary: Children at risk from exposure to radiation in the Fukushima prefecture have filed a lawsuit demanding that the government transfer them to a safer location.

14 children of Fukushima, the plaintiffs of the lawsuit, go to school everyday where the contamination level of radiation is dangerously high.

The map below shows air dose levels of radiation based on the data of “On the analysis of the radionuclide in the soil (cesium 134 and 137)”, announced by the Ministry of Education, Culture, Sports, Science and Technology of Japan, August 30, in which we applied Chernobyl evacuation standard indicated as colored circles. 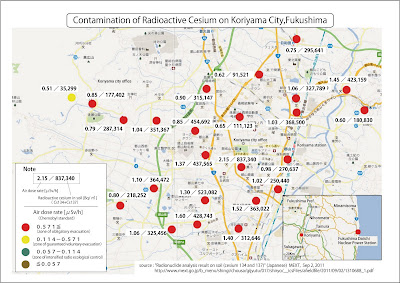 The 14 children of the Fukushima lawsuit live and go to school in these red areas, which would have been forcibly evacuated by the government following the Chernobyl accident. Considering the strict measures the Russian government mandated, the children of Fukushima deserve the same care the Russian children were granted. They should not have to stay in such a dangerous area. They need to be relocated by the government en masse to a safe area immediately.

The verdict on our appeal is expected soon. The judgment will have consequences not only for the 14 children who are the plaintiffs of the lawsuit, but also for all the children in Fukushima living with the dangers of internal exposure.

Please join us in appealing to people all over Japan, and all over the world in support of the lawsuit to save the children of Fukushima. Please support our action to bring justice to children whose right to safety and survival is unduly violated!

Please visit our blog and click in the check box next to “approve” below the entry to express your agreement with the appeal of the children.