Case Summary:
Background:
The applicants were two sisters who were born in Burundi and had French nationality. They arrived in France aged 16 and 10 years old following the 1993 civil war in Burundi. Their parents were thought to have been killed in the war, so custody of the children was awarded to their aunt and her husband - Mr. M who lived in France.

Mr M. was a former government minister of Burundi and a UNESCO staff who enjoyed diplomatic immunity. The family had seven children, one of whom was disabled. The applicants were made to do all the housework and had been used as “housemaids” to look after the family’s disabled son, with no access to a bathroom and only an unhygienic makeshift toilet at their disposal. They were not allowed to eat with the family and were given only basic staples and occasional leftovers. They had no leisure activities, were not paid or given days off.

The public prosecutor was seized of the case by the welfare department. No action was taken following an investigation. On further inquiry, the public prosecutor applied to the Director General of UNESCO to have Mr and Mrs M’s diplomatic immunity lifted and launched an investigation which resulted in the Ms being charged with infringement of human dignity, wilful violence on a child by a person in a position of authority, and subjecting a vulnerable person to working conditions or living conditions incompatible with human dignity under the French Criminal Code. A criminal court found the Ms guilty and sentenced Mr. M to 12 months’ imprisonment, suspended, and a fine of €10,000 and Mrs M. to 15 months’ imprisonment, suspended, and a fine of €24,000. The judgment was, however, reversed on appeal on the basis that the case was not made based on the burden of proof required.

The applicants brought the case with the European Court of Human Rights and alleged that they had been held in servitude and subject to forced labour at the home of Mr and Mrs M. and that France had failed in its positive obligations under the Convention to protect them from servitude and forced labour.

Issue and resolution:
Child domestic workers. Exploitation. Whether the applicants were subjected to forced or compulsory labour, whether they were kept in servitude and whether France satisfied its positive obligations under the European Convention to protect the applicants from violations of Article 4. The Court found that only the first applicant was subject to forced labour and servitude and that the state had failed in its positive obligation towards the first applicant to set in place a legislative and administrative framework to effectively combat servitude and forced labour.

Court reasoning:
The Court noted that Article 4 enshrines one of the fundamental values of democratic societies. It guarantees the right of individuals not to be subjected to slavery, servitude and forced or compulsory labour. The right not to be held in slavery or servitude is absolute and no exception or derogation can be made, even in the event of a public emergency threatening the life of the nation. Furthermore, the state has a positive obligation to protect individuals from slavery, servitude or forced or compulsory labour. This means that the state has a positive obligation to penalise and effectively prosecute actions in breach of Article 4 and to investigate situations of potential exploitation when the matter comes to the attention of the authorities.

The Court said that forced labour within the meaning of Article 4 means “work or service which is exacted from any person under the menace of any penalty, against the will of the person concerned and for which the said person has not offered himself voluntarily” and servitude - “an obligation to provide one’s services that is imposed by the use of coercion”. Factors that must be taken into account include the type and amount of work involved. These factors help distinguish between “forced labour” and assistance which can reasonably be expected of other family members or people sharing accommodation. In addition to the obligation to perform certain services for others, the notion of servitude embraces the obligation for the ‘serf’ to live on another person’s property and the impossibility of altering his condition.

The Court found that only the first applicant was forced to work in a permanent state of servitude within the meaning of Article 4. Her condition began when she was a minor (16 years old) and continued to adulthood. She did not go to school, received no training and received no days off or leisure activities. In contrast, the second applicant, who was aged 10 when she started living with the Ms) attended school and spent time with school work and activities before helping the first applicant with chores, so her life was not confined to the Ms’ home.

The Court concluded that France had failed in its positive obligation to set in place a legislative and administrative framework to effectively combat servitude and forced labour in relation to the first applicant. However, the positive obligation to conduct an effective investigation into cases of servitude and forced labour had been met, as the French state prosecuted the Ms. No violation of the European Convention was found in relation to the second applicant. 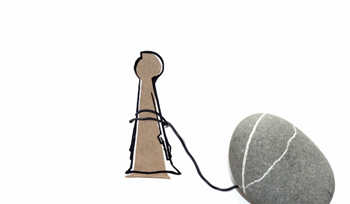